‘I am Woman’ Episode 1 Recap 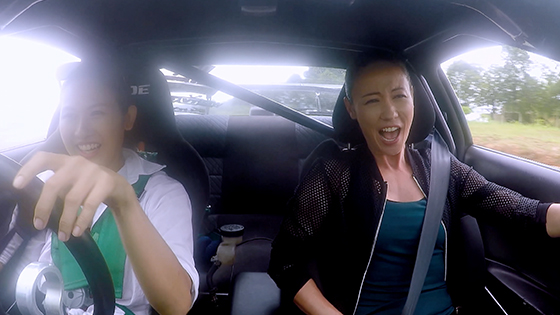 Car Reality TV Showi am woman
leona -
12:47 pm
In partnership with Prudential Malaysia, I am Woman series is out on Viu! The series explores the phenomenal women with extraordinary jobs usually dominated by men.

In Episode 1, host Alia Zecha meets with drift racing queen, Leona Chin. She has been making rounds on the race circuits for the last 10 years and is one of the very few female racers around.

Here is a recap of what went down at the scene.

Before they get on the racing track, Leona shows Alia one of the most important tricks in drift racing – changing the tyres.  She usually uses performance tyres at the front and normal tyres at the back. Depending on the road surface, she has to change the tyres very often. Sometimes, the tyres are gone within 2 – 3 minutes! After changing the tyres, she burns the tyres to lose traction. There she leaves scorched tyre marks on the road.

It is time for Leona gives Alia an awesome ride! Alia quickly asks her how long it takes to learn drifting while Leona drifts around the tracks. Leona answers that it takes many years to practice.

Leona encountered problems with the male race drivers. One of them asked her to move aside and let him through on the race tracks! That doesn’t stop her from doing what she loves. Furthermore, she is proving them wrong with her outstanding drifting skills that is winning her races internationally.

Her mom is very supportive and open-minded about her racing career after she brought her to the real racing scene!

Leona sets herself as a role model for women as she believes that we can be crazy but having safety is the main priority. She is living her dreams to become Asia’s #1 racing driver!

Leona vs Alia in a go-kart racing

Leona challenges Alia in a go-kart racing at City Karting Enterprise, Shah Alam. The racer who reaches the finish line after two laps wins. Before the race, she shows Alia how to win by ‘hugging the corner’ when approaching the corner of the race tracks.

The real competition begins! Alia is given a 30 second head start before Leona. Think that’s enough for Alia? Find out by watching the full episode!

Leona sure knows how to drift on the race tracks and proof to the male racers wrong!

What are your thoughts about Leona’s journey as a female drift driver in the racing world? Stay tuned for the upcoming episodes of I am Woman on Viu.