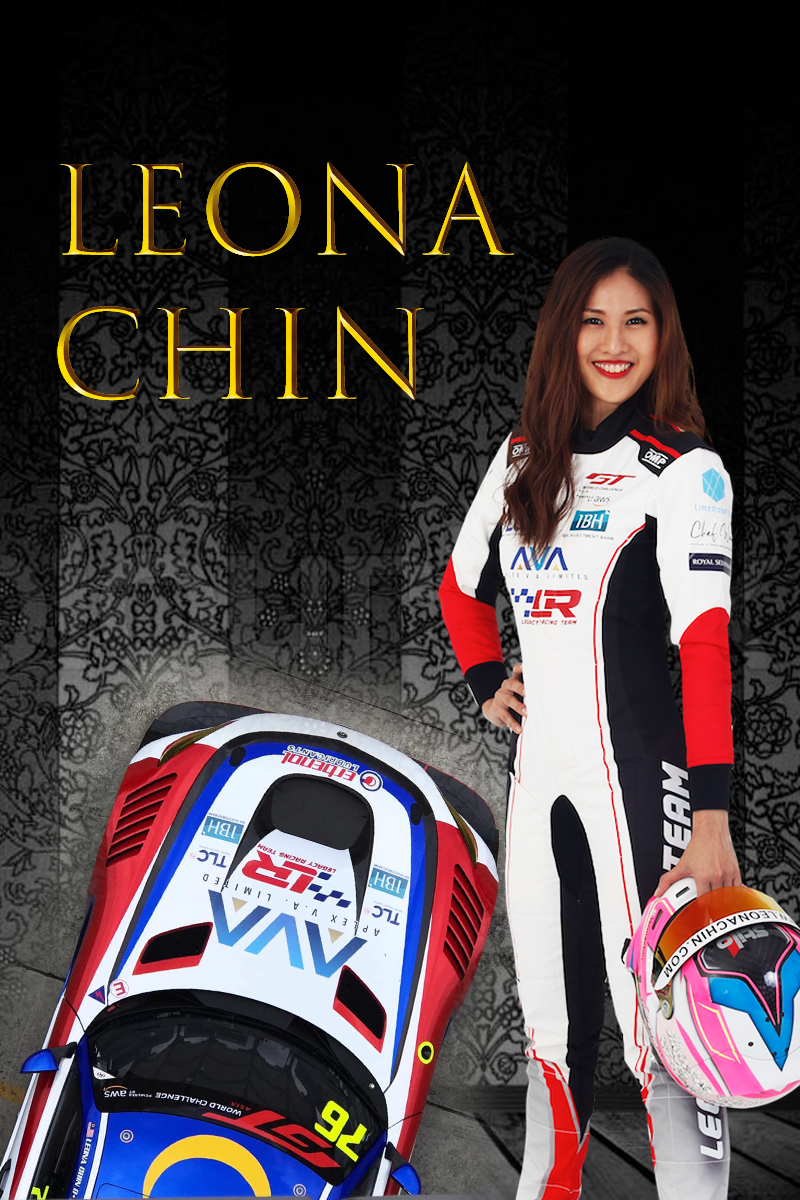 Leona Chin Lyweoi 陈莉慧 ( born July 23, 1986) is a Malaysian professional racing driver. Born in Subang Jaya, Selangor, Malaysia. She is the 4th child of 5 sisters. Leona’s mother is a widower, her father passed away when Leona was 16 years old.
Leona started liking cars at the age of 16, attending racing events and car exhibitions, she achieves her Malaysian driving license at the age 18, and started motorsport drifting at the age 20.
Leona’s current roles are Professional Racing driver & Motorsport Athlete, with occasional participation on Online and TV Appearances. Leona is also a social media Content Creator, as well as operating her own online shop on mudah.my. Chin also appears in a few movies as a professional stunt driver, along with numerous ambassadorship for brands( view partners).
Growing up, Leona studied at Catholic High School Malaysia. She further her studies at Northumbria University.
Leona owned a Nissan 180sx/200sx at the age of 20 with the support of her mother.  When she was at the workshop, a drift racer Mr Ser approached her. Admittedly, he was surprised to see a girl with such a car but he told her that she should consider drifting given that she already had the potential car for it. It may seem a bit of a funny story, but fate intervened as this stranger felt compelled to change her world. He offered to teach her to drift. In return, he asked Leona to design his website for him. It was an exchange of services. Everything she knew about drifting and racing, she learned from watching Youtube how-to videos and asking experts for advice and participated in various drift events to gain experience.
In order to fund her motorsports hobby, Leona sells t-shirts online and became a primary school tutor in her free time.
Leona entered a female driver search in 2008 and made it to the final for the Red Bull Female Driver Search. The 4 finalists entered the Merdeka Millennium Endurance Race 12 hour in 2008 with a fully sponsored race car a Honda Integra DC2, race support team, and training courses. The Red Bull Rookies Team finished 6th in the class. Leona continued the following year and taught the new finalist her driving skills for 2009.
Leona completed Red Bull Rookies Team 2010 and began participating in other disciplines of motorsports such as Gymkhana, Rally, and Autocross, Circuit racing, Time Attack with her own team to look for sponsors. She began creating her own YouTube channel and became a social media content creator.
In 2015, she collaborated with Maxman.TV for a prank video of a nerdy student drifting a Nissan Silvia with driving instructors and made it to international fame. The video collected 40 over a million views on Youtube and many more views on other video platforms. Leona and Maxman.TV received an award from WebTVAsia for the Freaking Awesome Video of the year award in 2015.
Leona was invited to China to appear in a Reality TV Show for Xuan Feng Che Shou ( F-TEAM) filmed in Zhuhai China with Top China Celebrities like Jimmy Lin, Liu Tao, Yu Quan , and Zhou Yong as mentors.  Leona performed with a Hyundai Genesis loaned to her by her friend at Shenzhen, China. Her performance amazed the mentors as well as the audience in the studio. Leona made it to the final 8 before getting eliminated due to an ACL leg injury. Although having a leg injury, Leona did not stop driving, she came back to Malaysia and performed a drift show for BMW Auto Bavaria and meeting WRC Champion Jari Matti Latvala for a challenge with Volkswagen Malaysia with crutches and a knee brace. Leona went through ACL physiotherapy and training at the National Sports Complex Bukit Jalil.
Leona also competed in Caterham Motorsports Championship full season with a Caterham Super Seven. Leona completed the Championship of 12 races winning 2nd overall in the championship series. Leona also participated in a 6-hour endurance race at Guangdong, China with a Chinese team driving a Subaru BRZ.
In the 2016 year, Leona and Maxman.TV collaborated for a second prank video for Mitsubishi Motors Malaysia’s Triton as a sales girl. Following the video, Leona became the ambassador for Mitsubishi Motors Malaysia. WebTVAsia (artist management company) signed Leona Chin up as a talent and sponsored Leona a full season of Clio Cup China Series in 2016. Leona participated in Clio Cup China Series 2016 and raced the full season with numerous podium finishes, achieving overall runner up in the Clio Cup China Series Championship. Leona also became a stunt driver for a leading actress for an upcoming Chinese movie called Reborn. Chin also collaborated with Oreo Nabisco for an Oreo dunk challenge video advertisement drifting her Nissan Silvia S15
In the 2017 year, Leona became a team owner and manager for Mudah Racing Team for the TGR Challenge.
She participated in Sepang 1000km in a Suzuki Swift and finished 8th in MTC class by a 4-man team Leona Chin-Woo Siew Cheong-Chong Yee Hing-Kenneth Shak headed by Team Riyoz Racing (William Chong)
In the 2018 year, Leona completed 4th in MTC class in a Toyota Altis for the Malaysian Championship Series 300km Endurance with (Team R Engineering, Mr Lai Wee Seng) & (Excel Group Race Team,Mr Megat Shazreal). She also completed 8-Hour Sepang 1000km Endurance with Team 23 Motors along with Dato Nasri Said, Keilifi Othman, Alif Hamdan ( 4-man team) and finished 4th in SP2 class. She won a total of  3 podium wins in the MSF Championship Series in the Proton Saga – Saga Cup Casual ( Team Millennium Motorsports Asia)  and Mitsubishi Evolution 7 – Super Street category ( Team Pitworks Kuraz Motorsports).
In the 2019 year, Leona received 2 awards; Most Promising Female Motorsport Athlete ( Asia Automotive Awards 2019) and Most Inspiring Female Motorsport Athlete ( Petronas SIC Motorsports Association of Malaysia (MAM) Awards 2018).
This year Leona partner with Tengku Djan for the GT World Challenge Asia Championship 2020, under the Full Malaysian Team –  ” Legacy Racing Team Malaysia“