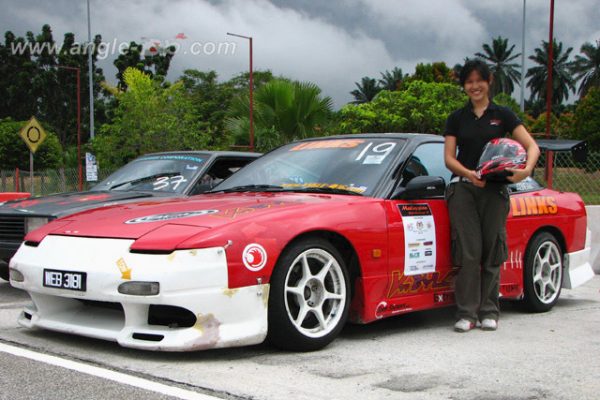 Leona Chin is one of the most attractive professional female racing drivers in Asia today. Since she stepped into the ranks of racing cars at the age of 21 or 2, she has won many honors and prizes in high-level events with her intelligence and excellent drifting skills.

In the racing world, Leona is well-known, and you may find her unfamiliar to those who do not watch racing cars, but you may have seen a highly focused whole-person video she published in 2015, which was on March 26, 2015. something happened. 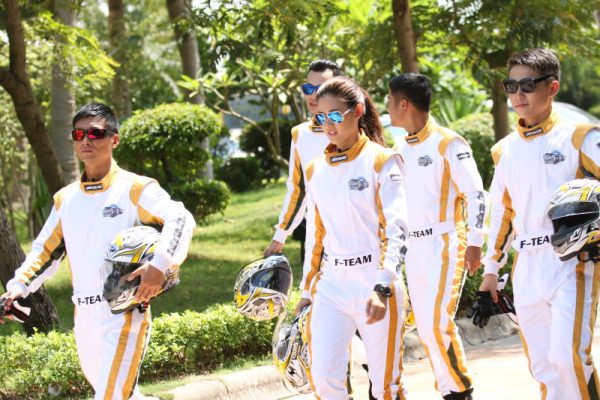 Leona tied two pigtails, put on glasses and colorful fashion girl clothes, pretended to be timid, and drove her brother’s sports car to the driving school to learn how to drive. In the beginning, she deliberately pretended to be inexperienced, started all kinds of stuck, and even the car died, so the coaches advised her to go back to practice more. But she mentioned glasses and asked the coach to give her another chance. As soon as she finished speaking, she stepped on the accelerator angrily and instantly began to flick her tail, carrying the coach to a sudden drift. The car galloped across the field, seemingly crazy, but in an orderly manner. The coaches were horrified by her sudden performance, and yelled: “Stop! You are crazy! Are you going to kill me?” The female coach even She was so frightened that she covered her face with her hands and screamed loudly… 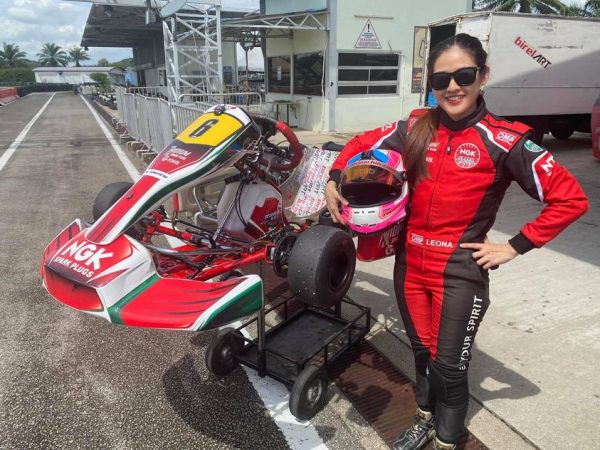 Remember the girl in the movie? After the video was broadcast, it received more than 300,000 views within two days and was rated as “the most terrifying prank ever made” at the time.

In fact, that video, not only opened up Leona’s popularity in the female racing industry but also made her name resound abroad. In 2015, she was invited to go to China to participate in the reality show “Dazzling Drivers”, which made her popular in the Chinese racing industry. In addition, she is constantly participating in international competitions and winning awards and is more dedicated to running her personal page, Facebook, YouTube channel, etc.

Although the epidemic situation continues to rise, Leona still accepted the invitation of “mywheels” and specially made an interview with reporters through video to chat with everyone about her and racing cars.

◎赛车对你而言是什么？ What is racing to you?
赛车是我的全部，如果我不是坐在车上，就一定是在模拟车里，又或是在看赛车杂志、YouTube或是TikTok。总而言之，我的生活里就只有赛车。Racing is everything to me, and if I’m not in a car, I’m in a sim 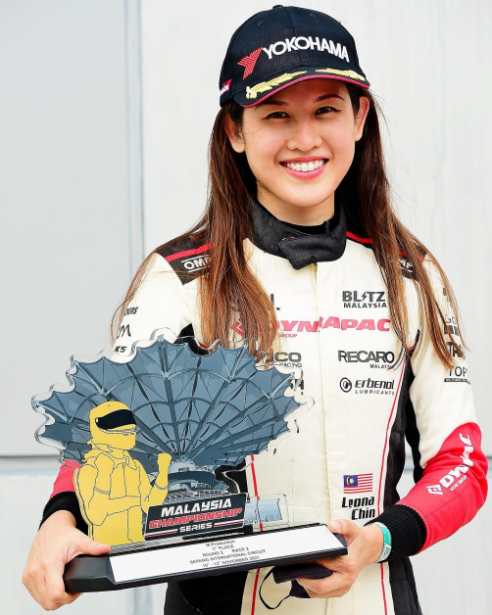 or watching a racing magazine, YouTube, or TikTok. All in all, my life is all about racing.

◎你是不是都与男性一起比赛？还是说你参与的比赛都有女性组别之类的？Do you all compete with men? Or are the competitions you participate in all women’s categories or something?
一般的赛事中，我都是和男性一起比赛，因为这些赛事都没有特别举办女子赛。但是近年来，有部分马来西亚的赛事会特别开设女子组，也就是说全部人都一起比赛，只是在颁奖时会多出一个女子组的颁奖礼，主要是为了吸引更多女子参赛。这是因为女子赛车手能吸引观众的目光，让更多人进入赛场观看赛事。

In general events, I RACE with men because none of these events have women’s events in particular. However, in recent years, some events in Malaysia have specially set up the women’s team, which means that everyone will compete together, but there will be an additional women’s team award ceremony when the awards are presented, mainly to attract more women to participate. This is because women racing drivers can attract the attention of spectators and bring more people into the field to watch the event.

And abroad, I know there is a W Series women’s formula, which was launched in 2018. The main hope is to create a sports platform that accelerates gender equality around the world and empowers women to participate in the upper-level organizations of motorsport (including F1). It’s a pity that I’m too old to be able to participate in such an event. 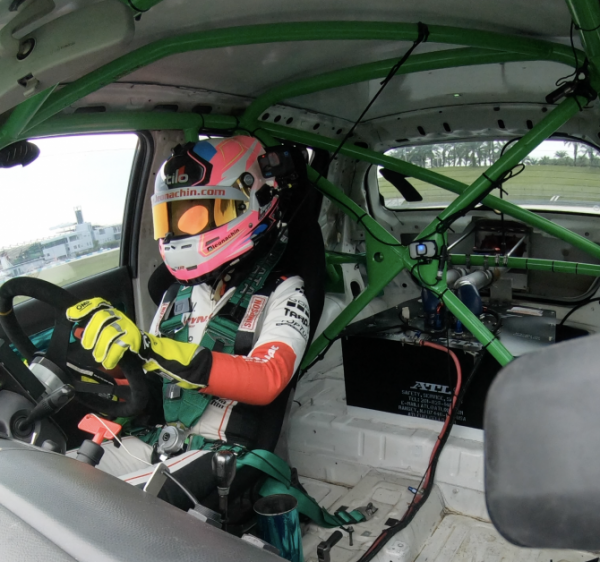 How many female professional racing drivers are there? Malaysia? worldwide?
据我所知，5年前本地只有约5名女赛车手，但是现在已经有十多个，而且也会越来越多。而全世界的赛车界里，女性车手最多也只占四分之一的人数吧。As far as I know, 5 years ago there were only about 5 female racers locally, but now there are more than a dozen and there will be more. And in the world’s racing world, women only account for a quarter of the number of drivers.

◎其实参加赛车有没有年龄限制？Is there an age limit to participate in racing?
没有，大多都不会有年龄限制。我所知道年纪最大的车手大约六七十岁，我也觉得我也会一直驾到无法赛车为止，所以年龄并不是车手参赛的一大限制，体能才是。只是赛车手每年都要更新赛车执照，所以每次更新前都必须做一系列的体能测试。像我们这些三十多岁的检验就比较简单，一般就只需要验看你有没有糖尿病、色盲和近视等，而那些年纪越大的就必须做心脏压力测试，因为担心他们开到一半心脏病发会造成其他骑士的危险。No, most have no age limit. The oldest driver I know is about 60 or 70 years old, and I also think that I will drive until I can’t race, so age is not a big limitation for a driver to participate in, but physical fitness. It’s just that the racers have to renew their racing licenses every year, so they must do a series of physical tests before each renewal. For those of us in our thirties, the test is relatively simple. Generally, we only need to check whether you have diabetes, color blindness, myopia, etc., and those who are older must have a cardiac stress test because they are worried that half of them will have a heart attack. Dangerous to other knights. 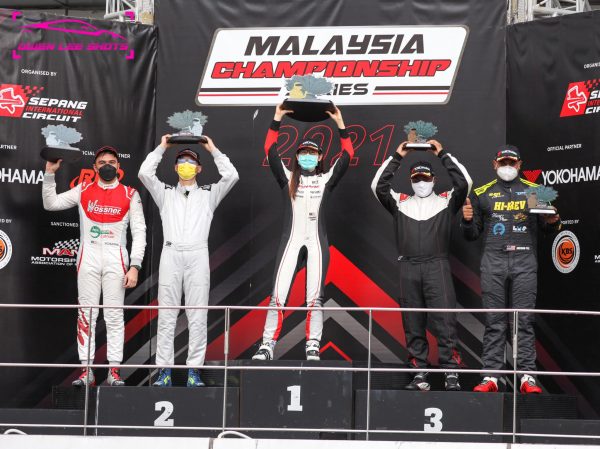 ◎请分享在你赛车生涯中最自豪和难忘的事情。 Please share the proudest and most memorable moments of your racing career.
在赛车生涯中，最令我感到自豪的成就应该是去年拿到了马来西亚赛车锦标赛系列上（MCS）的房车锦标赛（MTC）组别的首位女子总冠军。这是一个很难拿到的奖项，因为前几年的比赛中都面对了很多挑战，有很多车手会特意来把我撞出去。
去年我一共花了3天跑了6圈，每一圈共1小时赛事。最后一圈比赛是300公里拉力赛，只有一个休息站，真的很累。但是总算完成了我的奖项列表中的一个梦想奖项。The achievement that I am most proud of in my racing career is probably my first overall title in the Touring Car Championship (TCR) category at the Malaysian Motorsport Championship Series (MCS) last year. It’s a tough award to get because there were a lot of challenges in the previous years and there were a lot of drivers who came to knock me out.
Last year I ran 6 laps in 3 days, each lap was a 1-hour race. The last lap of the race was a 300km rally with only one rest stop and it was really tiring. But finally completed a dream award on my list of awards. 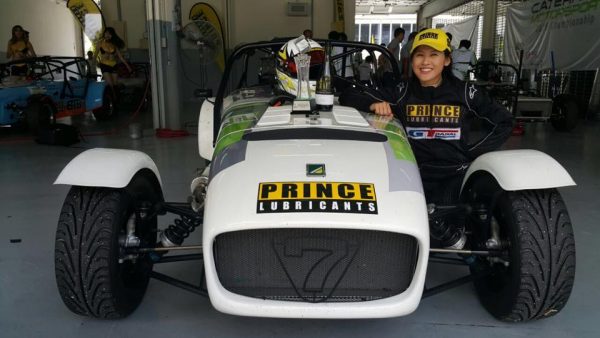 ◎你在赛车生涯中面对最大的障碍是什么？What’s the biggest obstacle you’ve faced in your racing career?
在赛车生涯中面对的最大挑战是资金。因为赛车真的是一项烧钱的运动，每一次练习和比赛都需要钱来维持。我们每一次比赛都会把车子驱驶至尽头，因此轮胎、引擎、零件等等都容易耗尽，需要大量的金钱做维修和改装。如果你是某车队的一员就可以不必担心这些事项，但是如果你不属于任何车队的话，就必须自己去找赞助商。The biggest challenge in a racing career is money. Because racing is really a money-burning sport, every practice and race requires money to maintain. We drive the car to the end of every race, so tires, engines, parts, etc. tend to wear out, requiring a lot of money for repairs and modifications. If you’re part of a team you don’t have to worry about these things, but if you don’t belong to any team, you have to find a sponsor yourself.
所以我除了要练习、参赛之外，也需要自己做计划书找赞助商。同时努力经营自己的专页和社交平台等等，主要原因就是让赞助商得到更多有价值的回报。Therefore, in addition to practicing and participating in competitions, I also need to make my own plan and find sponsors. At the same time, we work hard to operate our own pages and social platforms, etc. The main reason is to allow sponsors to get more valuable returns. 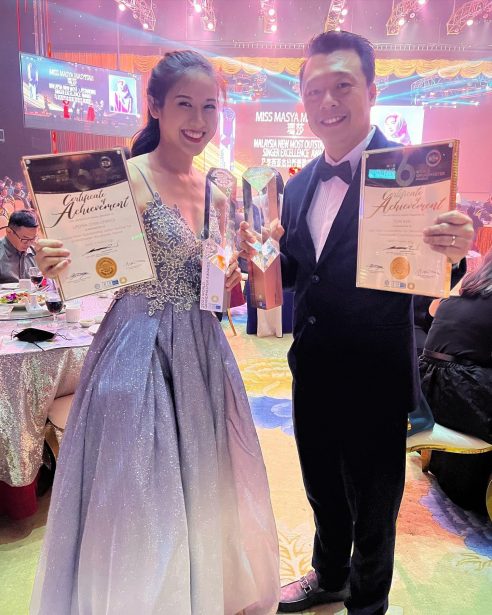 ◎在你的赛车生涯中，你觉得自己获得什么、牺牲了什么？What do you feel you have gained and sacrificed in your racing career?
我非常开心自己能在赛车生涯中找到了我的第二个兴趣──旅行。我很喜欢旅行，而在参加赛车比赛的过程中，我去过了香港、澳门、印尼、中国、韩国、日本、泰国等等，实现了我去旅行的愿望。如果要说牺牲的话，就一定是牺牲了交男朋友的机会。（她大笑后，认真的说）我把大部分时间都放在赛车上了，不比赛时就努力的去经营自己的社交平台，所以根本就没有时间交男朋友。而且我在比赛时也不会化妆，也没有刻意打扮，所以那些男生看到我应该也都没有了兴趣吧！I am very happy that I have found my second passion in my racing career – travelling. I love to travel, and in the process of racing, I have been to Hong Kong, Macau, Indonesia, China, Korea, Japan, Thailand, etc., and my desire to travel has been fulfilled. If you want to say sacrifice, it must be sacrificing the opportunity to make a boyfriend. (She laughs and says seriously) I spend most of my time racing cars, and I work hard to run my social platform when I’m not racing, so I don’t have time for boyfriends at all. And I don’t wear makeup during the competition, and I don’t deliberately dress up, so those boys should not be interested when they see me! 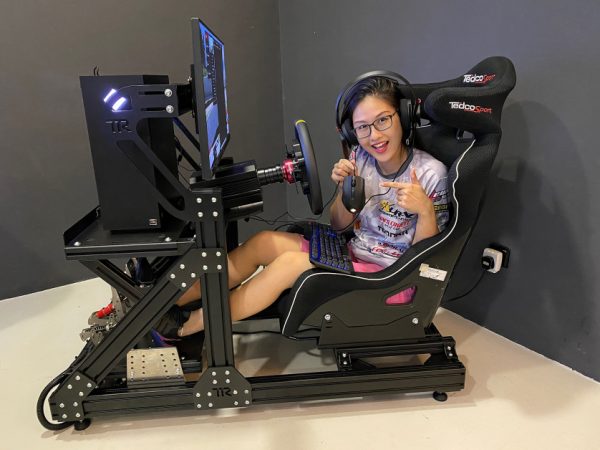 ◎你希望以自己的影响力为社会作出什么贡献？What do you hope to contribute to society with your influence?
我希望能以自己的力量鼓励更多女性进入赛车领域。我也带过几位女生和她们的跑车到雪邦赛道跑几圈，教她们一些基本跑车技术，让她们感受跑车的感觉。所以我也计划着未来要开办教车学院，让更多女性能更有自信的在路上驾驶。I hope to use my strength to encourage more women into racing. I also took a few girls and their sports cars to the Sepang circuit for a few laps, teaching them some basic sports car skills and making them feel like a sports cars. So I also plan to open a driving school in the future, so that more women can drive on the road with more confidence. 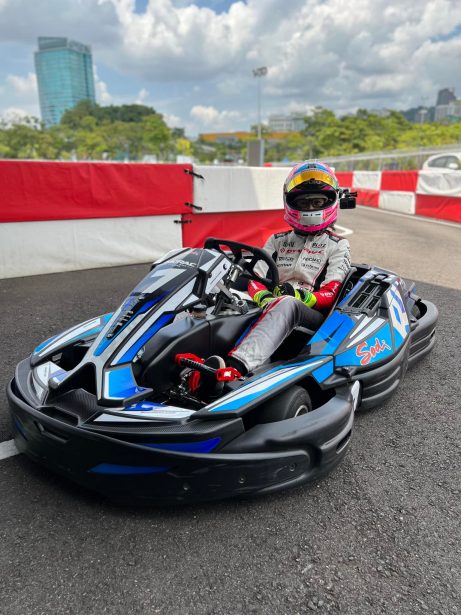 ◎ 你如何让自己持续不断地保持动力和对生活的激情？How do you keep yourself motivated and passionate about life?
不断地吸收更多的赛车新知，每天看有关赛车的视频，跟随最新的资讯增值自己，以防自己与赛车世界脱节。Continue to absorb more new racing knowledge, watch videos about racing every day, and follow the latest information to add value to prevent yourself from being out of touch with the racing world.

◎ Covid-19改变了全世界，对你来说，你自己最大的改变是什么？Covid-19 has changed the world, what is the biggest change for you in yourself?
Covid-19让许多比赛停摆，不但无法出国比赛，甚至无法到赛场上练习。我们这些赛车手也只有在家里透过模拟赛车来练习、比赛和交流。我就曾经在这两年里参加过一个与香港女子车手的网上比赛，通常我们会在这些网上比赛时通过交谈，讨论彼此的技术，绝对是有提升作用。Covid-19 has shut down many games, not only unable to go abroad to play or even to practice on the field. We racers only practice, race and communicate at home through sim racing. I have participated in an online race with a Hong Kong female driver in the past two years, and we usually talk and discuss each other’s skills during these online races, which is definitely a boost. 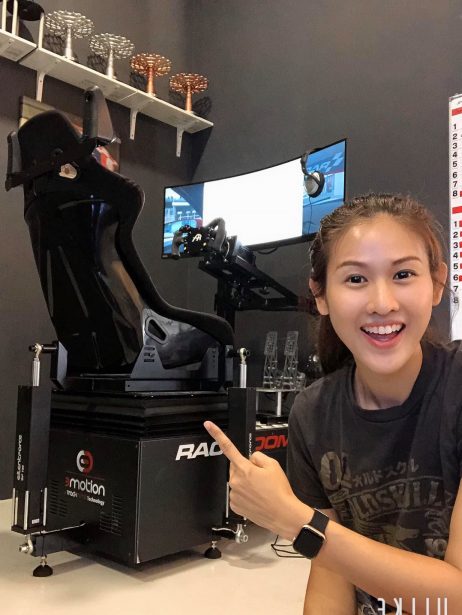 虽然如此，但模拟赛车始终无法与真正下场比赛互相做比较。模拟赛车少了温度、推动力、转弯和移动的感觉，所以整体来说还是有很大的差别。Even so, sim racing is never comparable to a real next race. The sims have less temperature, propulsion, cornering, and moving feel, so overall there’s still a big difference.