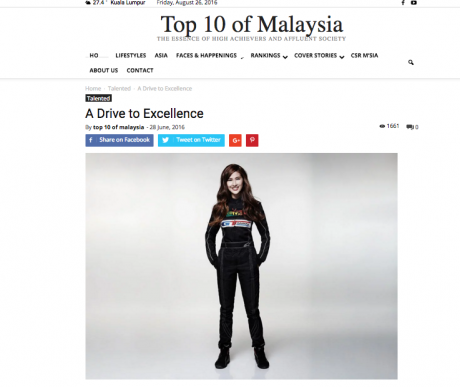 Leona Chin has set some breakthrough records for women racers in Asia including winning second place in Asia Series Caterham Motorsport Championship 2015 and a podium finish at the Clio Cup China Series 2016. In this issue of Top 10 of Malaysia, the top female racer in Asia talks about her journey to success and the motivation behind her passion to win.

For Leona Chin, Asia’s top female racer, girl drifter and motorsport athlete, success is a mix of hard work and luck. “Believe it or not, I started drifting by chance. I owned a Nissan 180SX, which is a fastback car that produces force from the rear. I was at the mechanic’s when a man approached me. He admitted that he was surprised to see a woman driving such a car, but he told me that I should consider drifting given that I already had the car for it,” she explains. On that fateful day, the stranger felt compelled to change her world as she knew it when he offered to teach her how to drift. In return, he asked Leona to design his website as a barter exchange of services.

“Everything I know about drifting and racing I learned from scratch,” Leona says. “Starting out with the basics of drifting, which are the ‘doughnut’ and the ‘figure 8’, I was then encouraged to take part in events to widen my knowledge of the sport.” It was valuable advice indeed, which gave her the much-needed exposure and experience that formed the basis of what she has mastered today. “In addition, through the events, more people became aware of my drifting abilities. I was even headhunted and approached by sponsors at some of the events.” Once she learned all she could about drifting, she began to branch out and explore other forms of racing, namely rally racing, go-karting, autocross and gymkhana, which is a form of motorsport that aims to achieve the fastest speed possible by memorising the race course.

Growing up, Leona’s interests were always sports-related. She started liking cars when she was 16, began drifting 10 years ago at the age of 20 and went into Circuit Racing two years later. Her mother, who single-handedly raised five daughters (Leona is her fourth child) after Leona’s father passed away when she was 16 years old, has been incredibly supportive in everything that she has done. “She told me if I wanted to pursue something I’m passionate about, I should do it with all my heart. She told me, ‘Don’t be ordinary, be extraordinary!’” Leona reminisces. “My aim is to develop myself to be an all-around racer, a jack of all trades. I used to be known as the ‘girl drifter’, but I would now like to be known as a motorsport athlete,” she adds.

From the outset, Leona is unfazed with thoughts on entering into a male-dominated arena and racing with the fastest male and female racers in Asia. “Being a professional racing driver is a dream for me. Apart from the passion to win, being able to represent my country and female racers are my main motivations. I keep going because there are people who look down on me, take me for granted, and are waiting for me to fail. I want to prove them wrong and show that I’m not a ‘Barbie doll’. I’m a racing driver.” Apart from her plans to win in an Asian series Championship such as the Clio cup China Series, she plans to venture into the entertainment line and is currently working with Hollywood producer Andre Morgan as a stunt driver for a new movie.

To aspiring racers out there, Leona cautions, “Drive safe on the roads, leave racing off the streets. And if you want to become world-class in any field, you need to abide by the ‘10,000-hours rule of deliberate practice’. There really is no shortcut to excellence.”