The first race of Clio Cup China Series was an unforgettable one. I felt the feeling of joy and excitement and 2  minutes later I felt the most upsetting and ultimately dissatisfied moments of my life.

My decision to race in China was a tough one, mainly because I really wanted to go to China but I didn’t have the funds to do so. Just like all my racing activities, I depended on sponsors to fund my race. I met and proposed to many people along my journey in motorsports and thankfully, I had the help from WebTVAsia who agreed to fund my China project. The event was a week away, I’m really thankful they did so much preparation like designing the Clio, my new helmet, my new suit. However time was very close, my suit and helmet didn’t make it in time for my debut race.

They even prepared a manager and videographer and personal assistant and trainer to come with me to China to support me. {tears of joy}. It felt great to have a team help me.

During practice session my first try into the Clio Race Car, it was a left hand drive. In Malaysia all my race cars were right hand drive cars. So it took some getting use to judge the curbs and apex. The car was a pedal shift gearbox, and had aftermarket brakes and suspensions. The weather was cold, foggy and damp, the tires were grippy but I did take a lot of time to warm up and getting use to the temperature of the track. I even draw the map on paper just to memorize the shape and corners of the track. The race car was fully prepared by the FRD sports who are the organizers of the race.

There were many Clio cars in the garage when our team came. It was hard to differentiate whose was whose. With the Sticker Decals done by Tom’s Stickers. Vincent and Natasha brought their tools and started to work on the car from morning until midnight. It was a long process and they followed every little detail. During the sticker process there was some miscommunication happened too. Apparently a “sponsor” of the race series wanted to stick a gigantic sticker on our car. We were shocked and confused as this was not mentioned in our conversation with the organisers. We had to discuss with them and finally the “sponsor” didn’t paste a gigantic sticker on our car.

Qualifying session 1 I qualified 2nd. It was a good qualifying but team wanted me to get Pole as I was just 0.02 seconds away from pole position. Qualifying session 2, I did even faster timing than qualifying1 but so did the pole sitter Kenneth. {not so easy lah}.

The reason I was so upset was because I missed out on Race 1 Podium finish and thus will affect my overall championship points. I finished 2nd at the end of the race and I was called to the control room instead of the podium room. Apparently I got a 30 seconds penalty for jump starting at the start of the race. They didn’t inform me during the race but only at the end of the race. It felt unfair because I didn’t jump start but I had the perfect launch but the marshals said I did, I had no choice, I was in a foreign country, they have many “rules” to follow. I took this as a lesson and accepted the penalty.  I fell to fifth position. I’d probably upload the “Jump Start” video link on my facebook later and you see for yourself…

But thankfully, I did not do the same “Jump Start” mistake but I had a slow launch at the starting but in the final lap I managed to score 3rd place in Race 2.

This 360 Video highlights of the race and brings the viewer in the cockpit, move your device and watch what goes on 360 degrees in side the race car beside me : https://www.youtube.com/watch?v=A_xti5szTKg 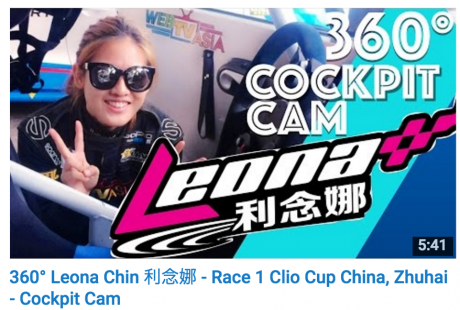 The car felt great during the race, tires were good, handling and respond of car was superb, brakes are better than before. Thanks to my team who worked hard to prepare the car. Thanks to Akina Teo my trainer and Mark Tomano the team engineer to give good “open data” explanation and advice to help to improve my personal timing.

The track was simple but with more practice I can use every inch of the track to clock good timings. The competition was exciting, I did a lot of attacking and defense during my race. I felt great that I am able to compete side by side with CTCC (China Touring Car Championship) drivers and they were not as “aggressive” {yet} as I was told. and also able to input new data for the drivers with my driving style.The data I provided throughout my practice and qualifying was able to make other drivers learn my driving habit and they used it to become faster. Vice versa.

More hardwork  needs to be done for the coming rounds to be able to catch up to the championship points.