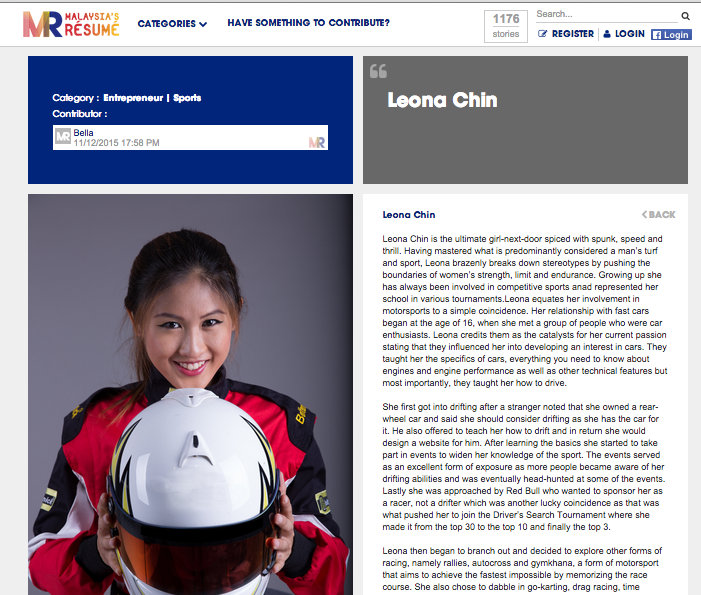 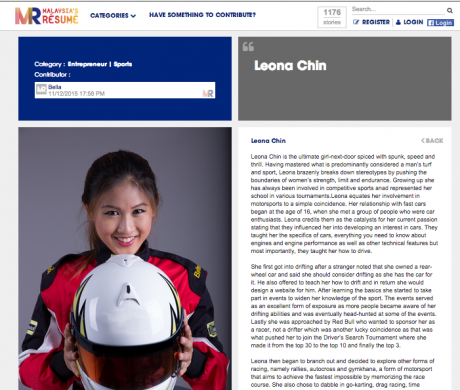 Leona Chin is the ultimate girl-next-door spiced with spunk, speed and thrill. Having mastered what is predominantly considered a man’s turf and sport, Leona brazenly breaks down stereotypes by pushing the boundaries of women’s strength, limit and endurance. Growing up she has always been involved in competitive sports anad represented her school in various tournaments.Leona equates her involvement in motorsports to a simple coincidence. Her relationship with fast cars began at the age of 16, when she met a group of people who were car enthusiasts. Leona credits them as the catalysts for her current passion stating that they influenced her into developing an interest in cars. They taught her the specifics of cars, everything you need to know about engines and engine performance as well as other technical features but most importantly, they taught her how to drive.

She first got into drifting after a stranger noted that she owned a rear-wheel car and said she should consider drifting as she has the car for it. He also offered to teach her how to drift and in return she would design a website for him. After learning the basics she started to take part in events to widen her knowledge of the sport. The events served as an excellent form of exposure as more people became aware of her drifting abilities and was eventually head-hunted at some of the events. Lastly she was approached by Red Bull who wanted to sponsor her as a racer, not a drifter which was another lucky coincidence as that was what pushed her to join the Driver’s Search Tournament where she made it from the top 30 to the top 10 and finally the top 3.

Leona then began to branch out and decided to explore other forms of racing, namely rallies, autocross and gymkhana, a form of motorsport that aims to achieve the fastest impossible by memorizing the race course. She also chose to dabble in go-karting, drag racing, time attack. She is a versatile female racer. Like most other racers, the lure of speed and the rush of adrenaline are what keep Leona going back for more.Following her success on the track, Leona and her friends have now gone on to organise motor sports events for up-and-coming drivers who are on a budget. Motorsports are truly part and parcel of who Leona is, confessing that she is unable to imagine a future without fast cars, race tracks and the accompanying rush of adrenaline.